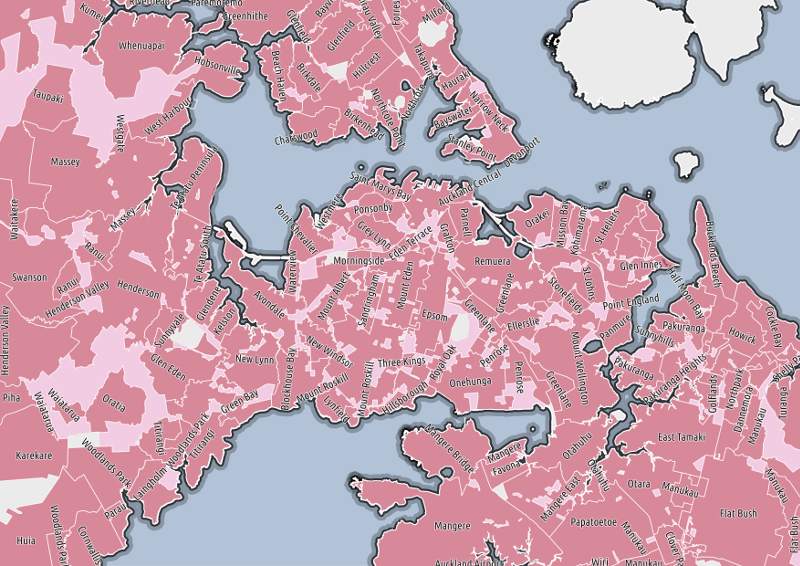 So, suburbs. You're probably looking at this map and wondering "what's the big deal?". It's a terrible map of the suburbs of Auckland. There are lots of holes. Some bits are downright inaccurate. And you'd be right to wonder. Then again, you might be someone who has once tried to acquire an authoritative, free and open dataset of suburbs for Auckland (or, better yet, the whole of New Zealand).

If you're in the latter group, then you're lucky enough to have experienced the strange black hole of rationality that surrounds the NZ Localities dataset held - oddly enough - by the New Zealand Fire Service Commission. And if so, you probably have an idea of why the map above is significant.

So here we are: we want to know about suburbs, but we can't use the official data. We'll need to get it elsewhere. Fortunately there is another CC-BY dataset that does have a locality field that looks a lot like a suburb1. This is the New Zealand Electoral Address dataset from LINZ:

How do we go from the point layer to suburb polygons? I first tried calculating Concave Hulls over the locality but the results were.. not great. However the priority for LINZ is to correctly locate addresses within Stats NZ Meshblocks. So we can assign the address locality to the containing meshblock in Postgres, including a count of the times that locality name appears, like so (where I've already imported the Statistics Meshblocks as meshblocks and address points as electoral-addresses:

Finally, we still have individual meshblocks, but we really want to join localities together to form single polygons:

Now our table meshblock-localities-union has just the locality name and it's geometry. I've then imported it into QGIS and performed some additional cleanup:

1. It turns out that the locality field is indeed, slightly indirectly, from the NZFS locality boundaries. More on that in Part 2.